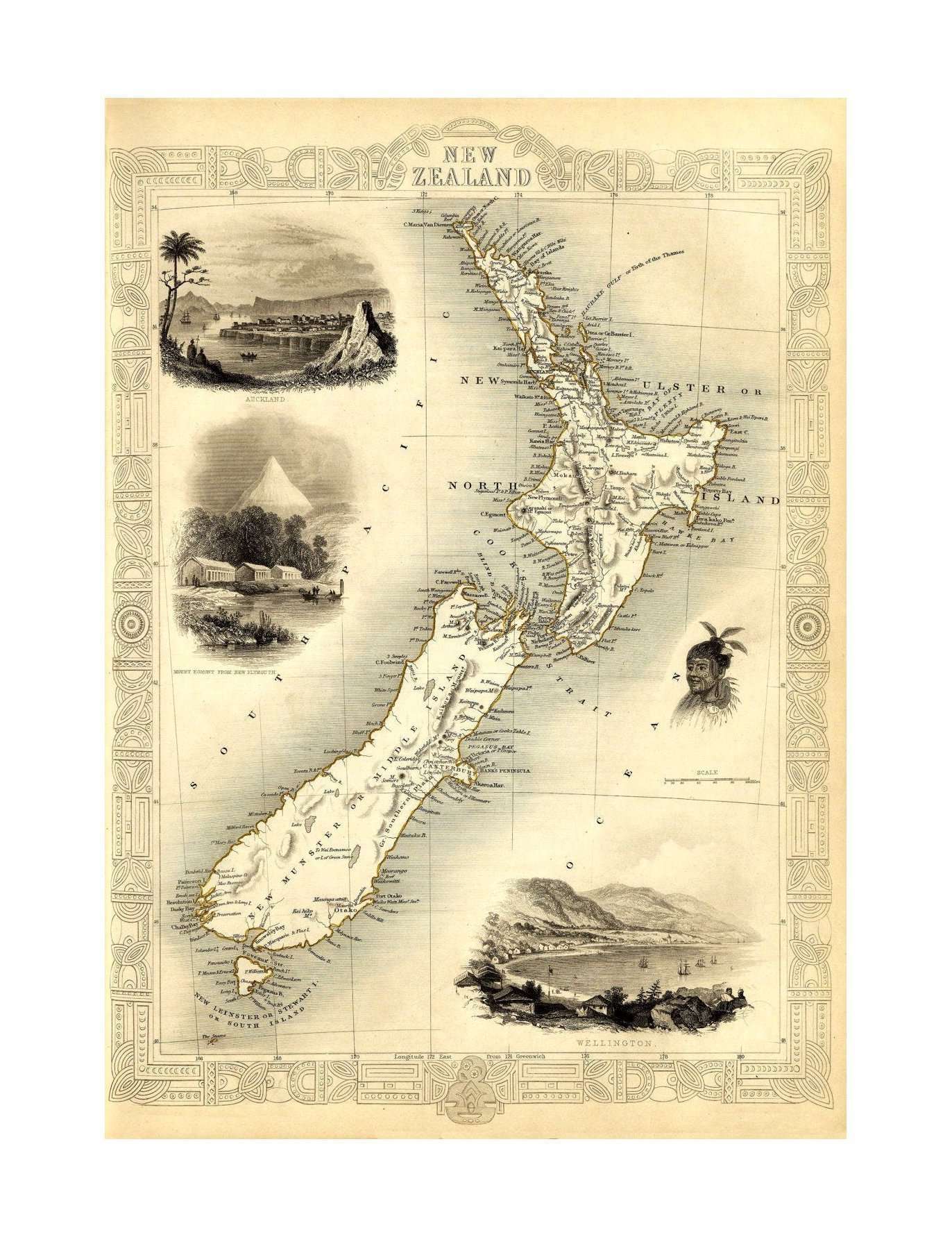 Are you from New Zealand and would like to have a nice large map hanging on your wall to show your homeland? Or did you just visit this beautiful country and would like to have something to remind you of your trip? This is a large old map of New Zealand created in 1851 by cartographer John Rapkin. It features nice illustrations of Auckland and Wellington. There is a drawing of a Maori person, and the map is framed by Maori inspired art forms with a drawing of a tiki doll at the bottom.
Key features:

Large map of New Zealand in front of you is showing New Zealand’s early colonisation period. At the beginning of the 19th century, they divided the country into 3 provinces New Munster, New Ulster and New Leinster. These were basically the three islands now known as North Island, South Island and  Stewart Island/Rakiura. The area was still part of the British New South Wales colony. At the beginning of the 19th century, the population of Māori was very high compared to the new settlers. However, things changed partly because of the wars between Māori tribes and mostly because of the great increase of the European settlers in the 19th century. If you want to read more about the history of the land, you can click here.

The author of the map is a famous engraver, John Rapkin. He was publishing his maps with John Tallis, who was a well-known cartographer and publisher from London. Large map of New Zealand was a part of an atlas called “Illustrated atlas, and modern history of the World”. They published the atlas in 1851 and you can find the map on the 55th page.

Who would not want to have a map like that on a wall? This map is one of those unique pieces of wall art that attracts guests to have a look at it and start a debate that can lead anywhere. The map sparks conversations about history, travel, origins of things and peoples backgrounds.

This large map of New Zealand has beautiful illustrations of Auckland Harbour, Mout Egmont from New Plymouth, Wellington Harbour, a drawing of a native Māori person, and beautiful Māori ornament border with tiki doll at the bottom. The map looks vintage and gives an impression it is actually two centuries old. We nail it on a hidden frame with beautiful copper nails to add to the vintage impression. With its thick canvas and quality printing; it is also very durable and will last for generations.

Buy the map and put it on the wall

If you think this map has to hang on your wall, we can make this happen in less than 10 business days all together! Hit that add to cart button or get in touch with us. If you need any help with measuring the wall or you would like to have a different dimension map, we can help you.