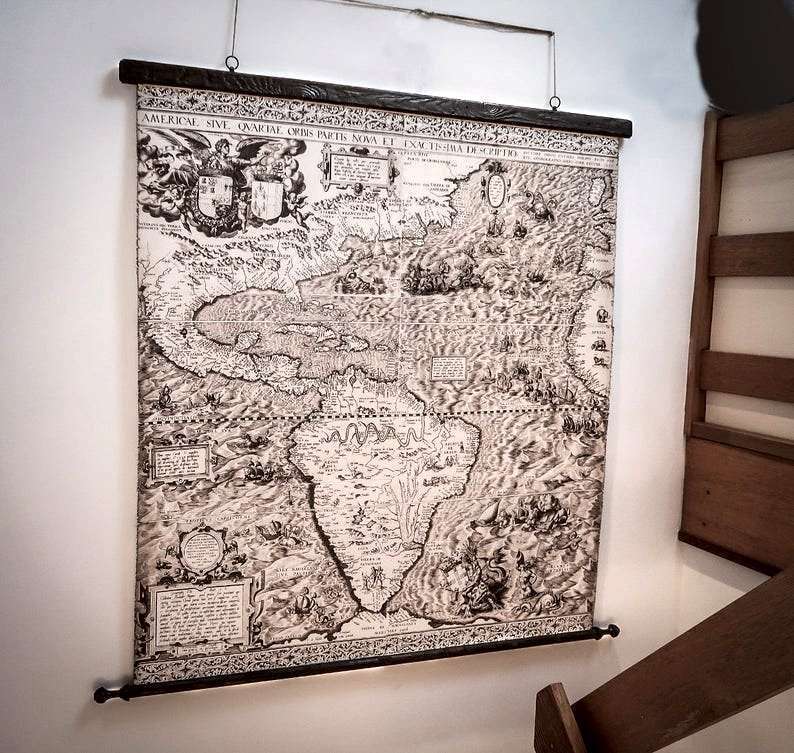 Did you know that only 2 original copies of this American history map exist in the entire world? That makes it one of the rarest pieces of historical cartography. Luckily we could get a high-resolution scan of one of them to share it with you in a form of beautiful and authentic looking wall map on canvas.
They published the map in 1562 – exactly 67 years after Christopher Columbus landed in the new continent for the first time. The map is a good representation of what was happening in those 67 years since the first discovery of the continent. You can find sea creatures representing the dangers and undiscovered spots, battleships fighting to gain the dominance of the areas and establish colonies. This is one of the first times California is mentioned.
A very exciting capture of history to have hanging on the wall!
Key features:

If you would like to know more you can call us or send us a message. We will be happy to have a chat with you.

This American history map is packed with rich illustrations, inscriptions, engravings and is beautiful to experience in person. The official name of the map is “Americae sive quartae orbis partis nova et exactissima descriptio”. In English, this translates to “the exact description of America – the fourth part of the world”. The map was published by Casa de la Contratación – Spanish court agency. Diego Gutiérrez, a Spanish cartographer, is the author of the map. He collaborated with Hieronymus Cock, an engraver from Antwerp to produce this striking and highly ornamental map. It is worth mentioning this was the biggest engraved map of the Americas at the time.
The history of the map is not clear also because only 2 original engravings remained. One version of history suggests that official Spanish authorities ordered the map to define and reinforce the area of Spanish influence in the American region and recognise French, as well as the Portuguese presence. But let’s not go into the politics of that. If you want to know more bout the map here is a link that leads to a page of American Library of Congress where the history and background of the map are dealt with in great depth.

This is a beautiful map with a lot of details and historical meaning. The big powers of Europe were dividing the new world and trying to get their share. You can get that sense when you view the map. You’ll see the coats of arms of Spain, France and Portugal. Sea creatures, Patagonian giants, monkeys, parrots, mermaids, cannibals and an erupting volcano in Mexico. According to some historians, that is one of the earliest mentions of California. Besides that, you can find Amazon River system marked on the map, other rivers of South American, Lake Titicaca, the location of Potosí, Mexico City and some others.
The size of the original map is 93cm x 86 cm (37” x 34”). Our version is slightly bigger to make sure it hangs confidently on a big wall.

The American history map is available in our Canvas Wall Maps store. It is made to order. It only takes about 10 days to prepare the map for you and another 4-6 days for the shipping. You can add the map to cart or send us a message.

Only logged in customers who have purchased this product may leave a review.

Be the first one to find out about our new maps, news, and special offers.