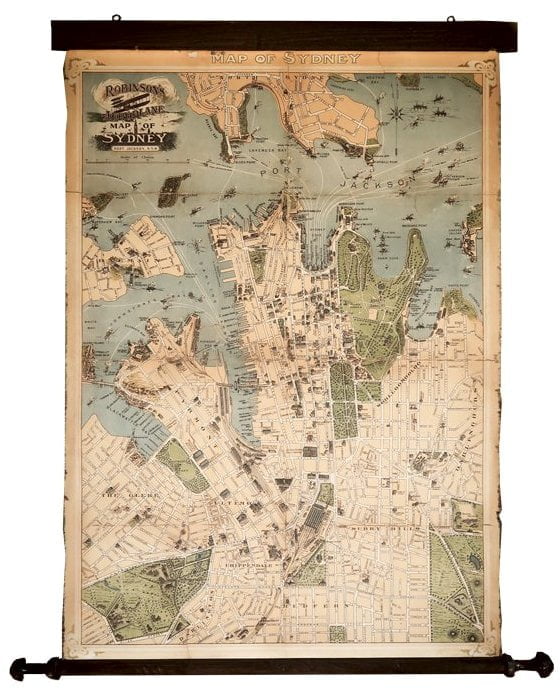 What was it like in Sydney 100 years ago? No Sydney Harbour Bridge, no Opera House yet, instead they had horse ferries and tram sheds. However, a lot has stayed similar, at least from a map perspective. Circular Quay is featured with some ferry lines that still run to date. Central station also seems to be in the same place as it is today, as well as botanical gardens. Who knows what will Sydney look like in another 100 years time? The Sydney wall map here details what it was like in 1922.

You can buy the map now by adding it to the cart or if you would like a customisation, please call us or send us a message. We will be happy to have a chat with you.

The Sydney wall map is full of the character from the first part of the 20th century. The map was published in 1922, just before they started building the Sydney Bridge. You can see a lot of the main streets that have the same names as they are now such as, Kent street or George street.  However, some streets were renamed after 1922, such as Randwick Road, which is now called Anzac Parade. The map shows 3D pictorial representations of important buildings. You also see can see ferry lines and boats in the water. It is like opening Google maps and switching to a satellite image. Speaking of which, if you are interested to find out more, you can compare how Sydney looks like now to the map by clicking on this link:
The map was published by H.E.C. Robinson Pty. Ltd. whose founder was Herbert Edward Cooper Robinson.

Even though this is a new product, it looks like it has been hanging on your wall through the ages and feels genuinely historic. It will give your space that early 20th-century charm. We make our maps using the best quality canvas and printing technique so we are confident they will last for generations.
The map comes with a beautiful wooden frame with sturdy construction. This is an interesting piece for those living or having a connection with Sydney, NSW and it’ history. It’s amazing to see the progress of Sydney down to the street or building level from what it was 100 years ago.

Buy this Sydney map with an amazing wood frame

If you want a high-quality canvas, historic map of Sydney, with an amazing wood frame, then this is the one for you. It will arrive ready to hang on your wall. Hit that add to cart button to purchase! You can also get in touch with us, we’ll be happy to chat.